Writers have always loved the Keys, none more famous than Ernest Hemingway, who bought a beautiful Spanish colonial home at 907 Whitehead Street in 1931 and stayed eight years. It’s a major tourist destination. I always go.

I like to walk around the tropical gardens and imagine the famously tormented author sitting on a bench near the sea grape and reading a manuscript. I like to enter the house and look at the photographs that celebrated his fishing conquests and later amble upstairs to his see the custom-made bed that accommodated his enormous frame.

From there I stand on the veranda and gaze down at the swimming pool, the first swimming pool in the city, and beyond that to the bungalow where, surrounded by animal heads and stuffed fish, he wrote in longhand.

One of the six-toed "Hemingway cats" at the Ernest Hemingway Home & Museum in Key West.

Slinking through the croton hedge next to the pool is a cat. Hemingway loved cats. Normal cats have five toes on their front paws and four on their back. Hemingway’s first cat, Snowball, was a polydactyl cat with six toes on her front paws and five toes on her back. She also was fertile. At times as many as 30 cats descended from Snowball had the run of the place. Descendants of Snowball descendants, at least 50 or so, have the run of the place now – those weird, six-toed cats that are a favorite of tourists.

Even casual fans are fascinated, fascinated by those odd cats, but more so the declarative sentences that packed an emotional wallop, and Hemingway’s over-the-top macho, his feuds with other writers, his fistfights with other drunken stumblebums in town and the alcohol he consumed nightly at the old Sloppy Joe’s (now Captain Tony’s Saloon.) Hangover or not, he was up early the next morning to write 500 words.

On the tour you will learn that the house was built in 1851, fell into disrepair, and was purchased Hemingway’s father-in-law as a wedding gift for $8,000. Ernest and wife Pauline spared no expenses. Their house was the town’s showpiece. Still is.

When he wasn’t writing he was boxing friends and enemies in the ring he set up in the garden, and drinking with friends, and arguing with friends, because that’s what men did, and fishing whenever he had the time, not for dinky snapper and grunts from the seawall like lowly tourists but chasing majestic marlin in the blue water.

One time a beginning writer went fishing for marlin with Papa – Hemingway’s nickname – and asked for advice. Papa told him: “Watch what happens today. If we get into a fish, see exactly what it is that everyone does. If you get a kick out of it while he is jumping, remember back until you see exactly that the action was that gave you the emotion.

“Whether it was the rising of the line from the water and the way it tightened like a fiddle string until drops started from it, or the way he smashed and threw water when he jumped. Remember what the noises were and what was said. Write it down, making it clear so the reader will see it too and have the same feeling that you had.’’

Hemingway could do that. It was his gift.

In the two-story house he finished “A Farewell to Arms,” his World War I novel, and produced “Death in the Afternoon,” his paean to bullfighting. In Key West he wrote the novel “To Have and Have Not” about smuggling during the Depression. He wrote perhaps his greatest short story, “The Snows of Kilimanjaro” and started his novel about fascist Spain, “For Whom the Bell Tolls.”

By 1939, he’d had enough of Key West. The town was too touristy. Those tourists bothered him, knocked on his door, distracted him from his writing. That’s what he told people anyway, though the truth was more complicated. He had a new girlfriend, you see. His wife had found out. Their marriage was kaput. Papa was running off with the new girlfriend.

He married the new girlfriend, a war correspondent, and traveled the world with her, until they got sick of each other and divorced. He married again, and this one was a real outdoorswoman who could fish and shoot and swear and put up with his moods. He published “The Old Man and the Sea” in 1954. It captured the Pulitzer and the Nobel Prize for literature. His public loved it, for the most part, but some important book reviewers in big cities took issue with the way Hemingway had made the old washed-up fisherman seem so noble. Was he writing about himself? Looking for sympathy?

His demons were chasing him like the sharks that had caught up with The Old Man’s marlin. Hemingway drank more, wrote less. At Mayo Clinic he was diagnosed as bi-polar and given shock treatment that affected his memory. He was of the generation that considered mental illness a weakness. On July 2, 1961, at his summer home in Idaho, he lifted the shotgun to his mouth and pulled the trigger.

“PAPA PASSES!” was the giant headline in the Key West Citizen. Hemingway. Of all people. Dead.

When the 30-minute tour ends I buy another copy of “The Old Man and the Sea” in the gift shop, which I always seem to do, and a postcard that shows a grinning Hemmingway posing with a dead marlin. The Hemingway on the postcard reminds me of my bare-chested dad when we lived in Key West when I was a boy, only my dad was one of those men who fished off the seawall because he got seasick.

In the garden, in a grove of bamboo, I sprawl across the bench and open the book. “He was an old man who fished alone in a skiff in the Gulf Stream and he had gone eighty-four days now without taking a fish,’’ is the first sentence.

Something warm touches my ankle. It’s one of the Hemingway weird cats, trolling for a scratch. I’m happy to accommodate him, but I’d rather be fishing for marlin. 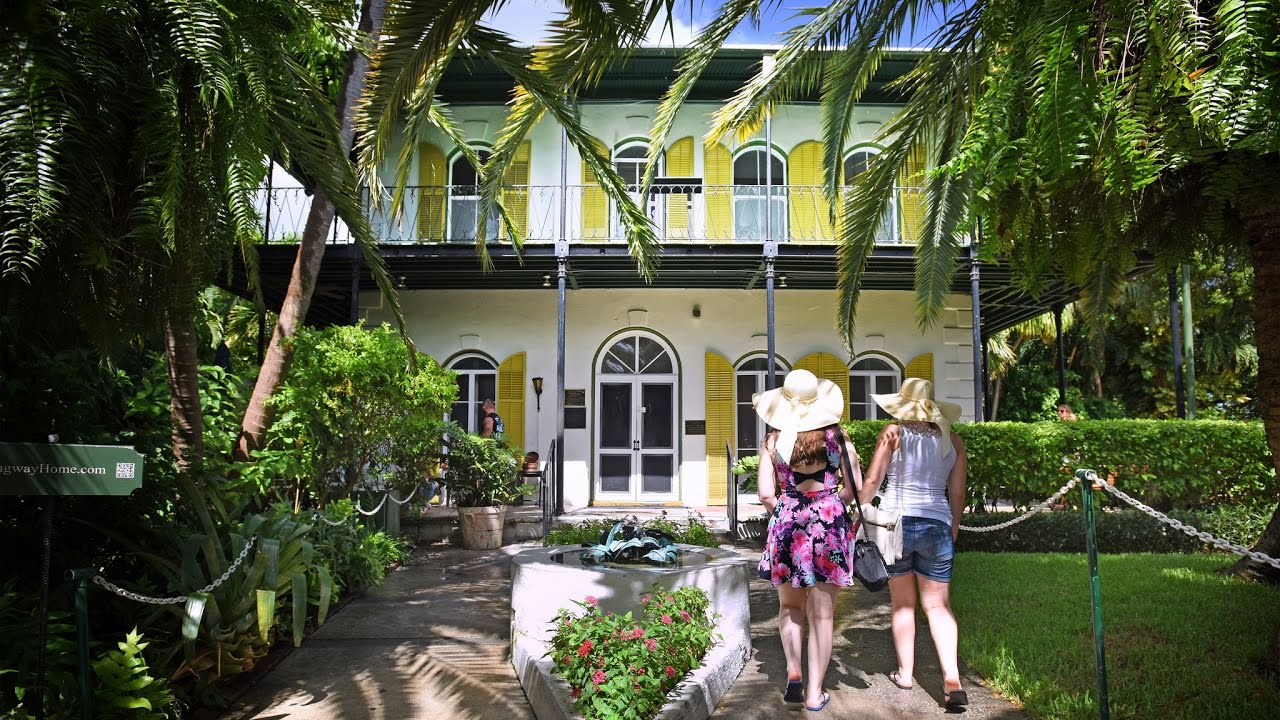